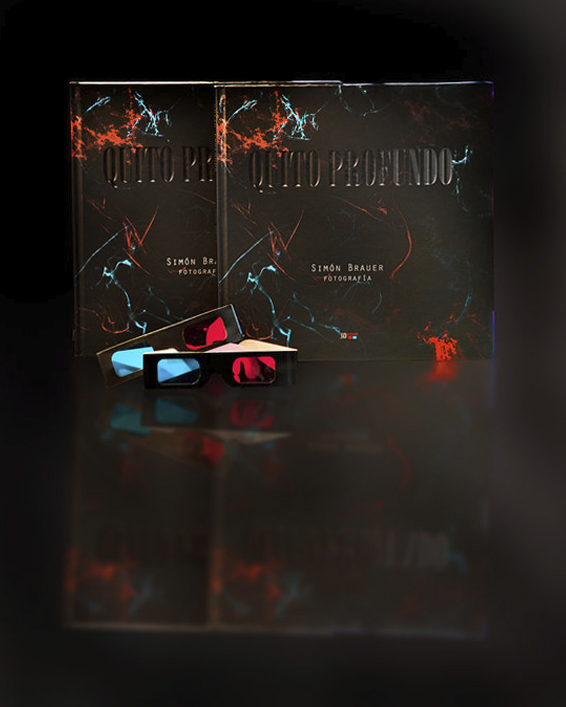 To enter Simón Brauer’s photographic world is like entering the world of Lewis Carroll’s Alice, which is to say, Wonderland. It is a world that remits us to the wonderful as uncommon, different, out of this world. Thanks to the magic of the third dimension, you enter, you go further in, you step inside a thousand worlds, a thousand lives, a thousand solitudes. You enter the underworld. The human being is born alone, dies alone, and, even more painfully, lives alone; is what Simón Brauer tells us. And he shows us and makes us feel this masterfully. This is why he chooses the Church as the place of hope and, at the same time, of the biggest solitude. The human being desperately seeks something to hold on to, and that something is the belief in a superior being, a god that at a given time will take pity on us and all of our suffering. This is why, in all societies throughout the history of time, we have erected temples to shelter us and get us closer to that something we believe exists but cannot explain. Then, Simón Brauer asks of us: What is a temple? Can one truly find peace in a church? Or, maybe, are these the loneliest of all places? One has to be brave to ask of oneself if there is anything crueler than the solitude of a church. The human being enters it searching for hope and finds himself perhaps more alone than ever before. Brauer approaches his subjects with caution, silently, on the tip of his toes. That is why we find, at the beginning, beings with their backs to us. There is no need to see or feel their expression, because their posture says it all. They have their backs to the world, and their front to the dream, the illusion , the calling of a faith that is the only thing that keeps us alive. Perhaps, Simón suggests, we are looking at a symbolism of a humanity that does not look straight at what it owns, a humanity that turns its back on its present in order to center itself on a future that will never come.

Simón Brauer then, does not stay still. He insists, he wants to inquire into what is going on with humanity and enters it without shame, without fear. We understand that those faces are absent; that what their backs reflect is also a reflection of their eyes, because those eyes have placed their illusion in another world. They are not with us; they are not part of the present. They search with desperation for a way out, for a hand that will ease their anguish, their sadness, their torn souls.

And that is how we inevitably arrive to the world of icons, of symbols; of everything that can take us away from our daily life and make us dream. Sadly, these icons that we shout out to, light, illusion, hope, the pretty face of life, are made out of ice, they do not answer. The golden church does not answer, the holy resting place, nobody answers. There is an overwhelming silence that takes us little by little to our fatality, to our condition of human beings filled with pain and misery, destined day to day to a cold death that will lead us to oblivion.

Suddenly, a way out, a circle through which the sky is visible, but a sky that fills us up with air and also shows us its sadness, since it’s a white, cloudy one. And then we meet a hard, cold, cruel angel that points at us all, not allowing even a drop of hope to pass. In a hurry, but trying not to be heard, we cross a hallway in order to run away from him and we run into a nun that turns her back on us. Religion shuts its doors on us. All that is left is the hand of the man with the defiant gaze that, filled with dignity, ask us, not for a handout, but life, hope, joy, because all of that was taken away from him when he was a child. Because injustice exists, and sometimes the stars get enraged with us, like the gods in Olympus got enraged with humanity according to their moods. In Greek mythology we find two goddesses of justice that share the same name: Temis. One holds a scale with the right hand, a sword with the left hand and looks at the scale with peaceful eyes. The other one holds the scale with the right hand, the sword with the left hand and does not look at the scale because her eyes are covered with a blindfold. This is the goddess that reigns over Simón Brauer’s book of photographs. A goddess that does not see justice, a goddess that allows pain and injustice to exist. Where beings with strong, decided gazes, despite everything, do not resign themselves, do not surrender to life and will die courageously.

It is that simple, Simón Brauer is courageous. He is not afraid to face the fate of man, his destiny. Instead of focusing on himself, searching for peace and spiritual tranquility, he has chosen to see, to take off the blindfold, like the first goddess Temis. He prefers to accept the fact that sadness and pain exist, that they are a part of life. And because of that, in the midst of so many lost looks, or so many backs, he also searches for brave people that despite their pain know how to look defiantly. Because they do not choose that life, because they do not believe in resignation. Because to resign oneself is to be a coward.

I do not believe anyone will remain unharmed after reading this book. It is impossible, because Simón’s approach is truly profound and has been executed with absolute mastery, which makes it a necessary book. Because, even though we feel guilty of entering these photographs filled with pain that can rip us apart; because even if we allow ourselves to be taken away, to look at each of its images, because of the heaviness, there is a beauty that calls us. Because pain and misery have beauty inside them. Because the lotus grows in the middle of the mud and is the most beautiful of all flowers. And the lotus is in every single one of Simón’s photographs. At the end, one comes out of the experience so overwhelmed that the eyes burn as if we had been trying to look straight at the sun, but still amazed at what we have in front of us.

Because it is not in us human beings to decide, we only arrive to the end of our lives and oblivion. There lie the graves, with all their decadence and evil seductive powers, scary, inevitable. However, under those graves portrayed with the eye of a master, I suspect that a life much more beautiful than this hides, where flowers of a thousand colors grow and faces smile. That is, nonetheless, the labor of a different book, of different dreams.

What is both surprising and captivating about these images is not only the three dimensionality accomplished by the contemporary version of the machine David Brewster designed and built 150 years ago. It is, above all, the sensation of watching an unseen reality; a new reality; the elements of a hyper real Quito magnified by its isolation and the removal of the surroundings.

What is both surprising and captivating about these images is that they question our prior perception of the same places and characters; they warn us that we can always see more than what we see in a photograph, or that what we see in it is incomplete.

They seem to tell us that in them, time is present.

But this could not be achieved by technique only. This dynamic reality was captured by Simón Brauer, who is not just a photographer; he is a fish that learned to swim in the space of Quito, scrutinizing our corners with new eyes and conversing with the Quiteño goblins in new words.

‘The only steps I could hear were my own, the doors were closed, I was alone in the cathedral…’ Simón Brauer tells me as he drinks his coffee. A moment ago, with the glasses he has given me – one side red, one side blue –, I’ve looked at the pictures of his book. A profound Quito. A book of churches, in 3D. Who comes up with something like that? The first sensation is one of astonishment. A feeling of wonderment before the centennial architecture and the baroque altars where the divine tenderness lie…and the solitude–above all the solitude! - of places and characters that pray in the golden darkness. The Depths of History converted to the Depths of the Image. Characters that carry their past on their shoulders, whose gaze, hands and clothes hit the spectator with the certainty of the irretrievable, of the already experienced. Forgotten graves, remains removed. Deep corners of the city in which we live, corners that we have stopped seeing, brought back, in the most surprising of ways, by this book. Photograph alter photograph, Simón refines his technique, showing a cult of the image similar to the devotion his characters profess. An art that beyond the lights, equipment and refined lenses of his camera, has the sensibility to observe in order to interiorize. An Art that feels and transports, in three dimensions, an intimate experience of the places it visits. A mature book from a great photographer with a great subject and an unexplored device in our city’s photography.